Drupal is constantly evolving, and with evolution comes the transition. Drupal 7 was launched in 2011, Drupal 8 in 2015, serving the Drupal Community and its users for a long time. In the meantime, Drupal 9 is due to be launched in 2020, which means that Drupal 7 and 8 will reach end-of-life at the same time, in November 2021. This raises a lot of questions for those with websites built on older versions of Drupal.

In this article, you will find essential facts about the start of Drupal 9 and helpful tips for a successful change to the latest version.

There are three possible dates for Drupal 9 release based on Drupal's current release strategy: June 3, August 5 or December 2, depending on how quickly the Drupal community completes the latest details of Drupal 9.

Regardless of the exact release date, the end date of both Drupal 7 and Drupal 8 has already been determined: November 2021. This is the time when the support for Symfony 3 framework on which Drupal 8 is based ends. By then your upgrade to Drupal 9 should have been completed, otherwise, the security of your website can no longer be guaranteed. 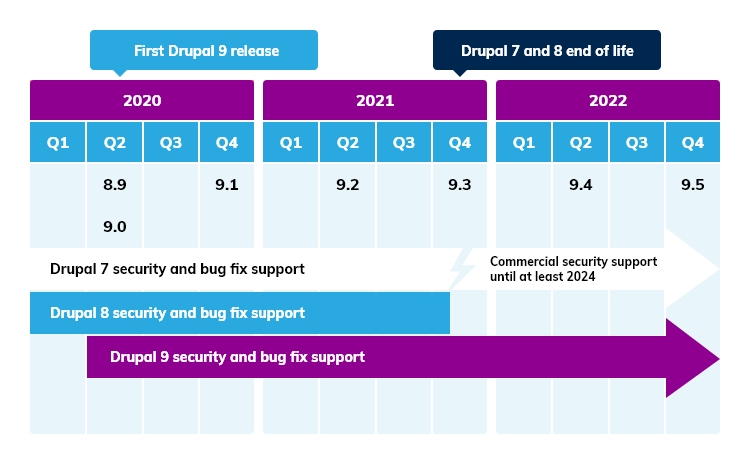 The introduction of Drupal 9 will not make any major differences to the latest version of Drupal 8 in terms of the existing functionalities. With the release of Drupal 9, supported versions of software such as Twig 2 and Symfony 4/5 will be available. The biggest changes will be: removing the outdated code from the previous version, refining the media library, improving the admin UI and simplifying the Drupal validation. The minimum required PHP version will be 7.2 or even 7.3, which also increases performance. Some new features will not be finished with version 9.0, but will only be available with the following updates. The release of Drupal 9.1 and 9.2 are planned for the end of 2020 and mid-2021.

Drupal 8 and 9 come with a migration framework, which means that migrating content from previous versions, as well as from other systems, will be a simple task. This also applies to the code, the community has created its own page for "Converting Drupal 7 modules to Drupal 8“, which covers all common scenarios and problems.

Work continues on these functions and features:

Upgrade from Drupal 8 to Drupal 9

The Drupal 8 lifecycle will end in 2021. If you are already using Drupal 8, you are lucky that you may be able to switch to the next version with little effort. Drupal 9 will not be completely rebuilt, it will become the latest version of Drupal 8, with updates for third-party dependencies and outdated code being removed. This way, the developers will have the opportunity to test the code and make updates before the release of Drupal 9. So, if you keep your Drupal 8 installation up to date, upgrading Drupal 8 to 9 will not be time-consuming and costly. Request analysis now.

Upgrade from Drupal 7 to Drupal 9

Drupal 7 will reach end-of-life status in November 2021. At that time, the official support of Drupal 7 from the Drupal community, including support for updates, security fixes and upgrades from the Drupal Security Team and the Drupal Association will be discontinued. Starting with 2021, a commercial support program that will provide Drupal 7 with security updates for another three years will be available. This means that all website operators who use Drupal 7 have a little more time to upgrade.

An early upgrade from Drupal 7 to Drupal 8 allows you to use the tools that will make your jump to Drupal 9 easier. Migration from Drupal 7 directly to Drupal 9 is much more difficult and may hold many surprises, especially since Drupal 7 is not based on Symfony and many concepts and APIs have changed. Request analysis now.

Upgrade from Drupal 6 or older to Drupal 9

In short, upgrade is strongly recommended. Drupal 6 or older versions have not been officially supported for years. Drupal 9 does not include migration facilities for Drupal 6. Migrate your projects from Drupal 6 to 8 and prepare for the switch to Drupal 9 on this basis. Request analysis now.

Let us analyze your Drupal website, look for outdated code in the modules and themes, prepare a roadmap and give you action suggestions that will lead to a successful upgrade to Drupal 9. 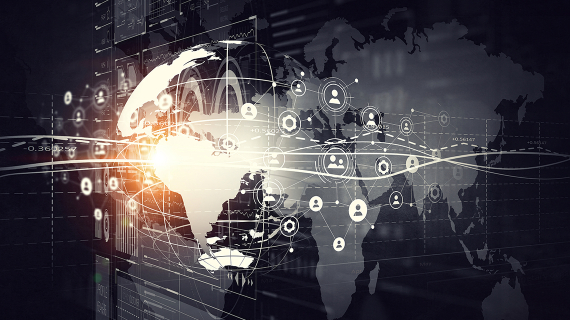 Digital solutions - the driving engine for a successful business transformation